Tezos price is temporarily supported by the confluence of key support levels on the daily chart. Still, the digital token has failed to inspire buying commitment after triggering the double top. If the support breaks, XTZ is staring at an additional decline of nearly 30%.

Tezos price rallied in March thanks to “hopium” in decentralized finance

On April 18 and with heavy volume, XTZ crashed 25% from high to low, activating a double top pattern at $6.09 and before discovering support at the intersection of the topside trendline and the 38.2% Fibonacci retracement of the rally beginning in late December 2020. The altcoin has since declined to the 50-day simple moving average (SMA) before rebounding in the support range.

Due to the sharpness of the decline, it is expected that XTZ will oscillate further in the range framed by the critical levels mentioned above, and it may even bounce to retest the double bottom level. Still, the combination of technical indicators points to lower prices.

Tezos price will be supported by the 50-day SMA for a short period of time before collapsing to the 50% retracement at $4.64, which frames another support range with the March 9, March 18, and March 20 highs.

Additional support will emerge at the 100-day SMA at $4.25 and then the eventual thesis forecast, the 61.8% retracement at $3.92, returning a loss of nearly 30% from the current price. 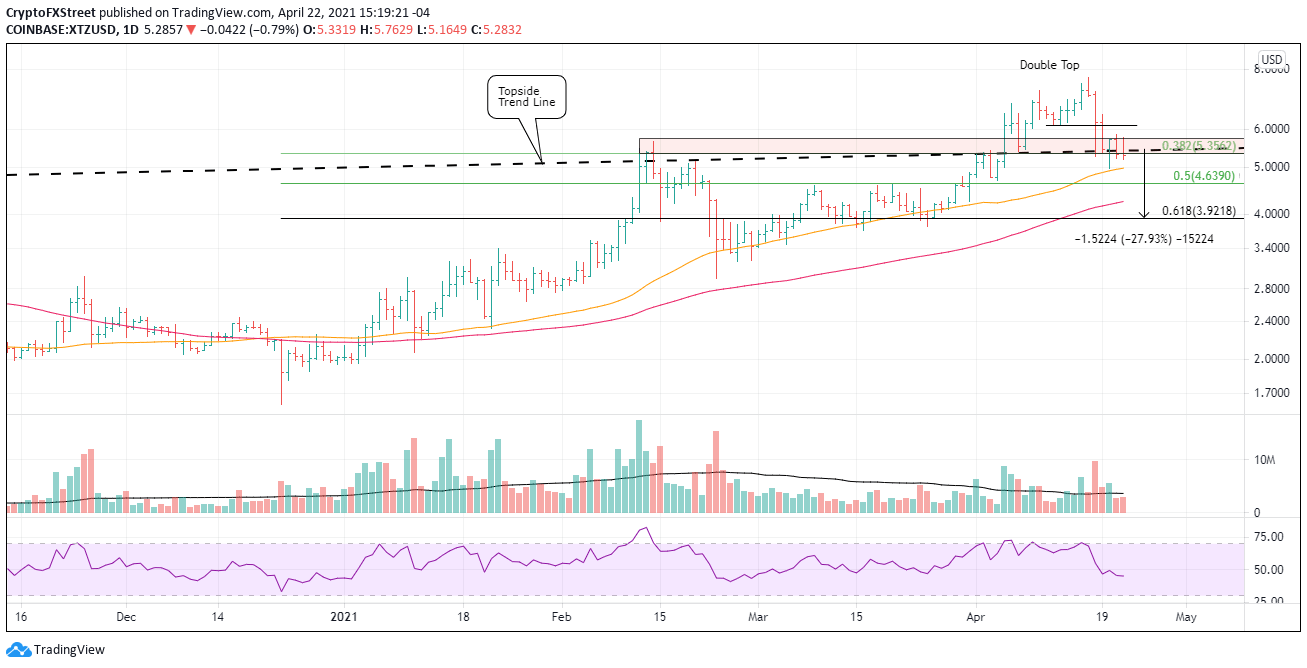 On the other side of the fence, a daily close above the double top trigger price of $6.09 would open the door for a test of the all-time high at $7.67 and potentially higher if there some buying emotion.

Get the 5 most predictable currency pairs

Polkadot emerged as one of the best-performing tokens week-to-date as traders' focus shifted on DOT's listing at Coinbase Pro...

XLM price impulsiveness on bounces has been non-existent since the beginning of June as the digital asset rests on ...

Bitcoin price has experienced a 32% upswing over the past six days and might retrace to gather more steam....

Bitcoin and Shiba Inu Cryptocurrency in the Crypto Spotlight

The worlds most popular cryptocurrency Bitcoin has now surpassed $40,000 for the first time in more than three weeks....