Visa and PayPal Give the Green Light to Cryptos. Should You?

The acceptance of digital currencies as a form of payment expanded greatly last week, foreshadowing the increasingly important role cryptos such as Bitcoin and Ether will play in our lives going forward.

Both Visa and PayPal announced they will begin allowing the use of cryptocurrencies to settle transactions. This came a week after Tesla said it will now accept Bitcoin as a method of payment, and a month after Mastercard signaled it would start supporting cryptos sometime this year.

PayPal’s Checkout with Crypto, made available to select U.S. users last Wednesday, gives consumers the ability to purchase goods and services at as many as 29 million merchants using Bitcoin, Bitcoin Cash, Ether or Litecoin.

Founded in 1998 by Peter Thiel and Elon Musk, among others, PayPal has become a trusted household name. 2020 was a record year for the online payment service as people were stuck at home and companies digitized their operations. Total payment volume was a massive $277 billion, a 39% increase from the previous year, while the platform added 16 million new accounts, for a total of 377 million registered accounts.

Very soon, every one of these users will be able to use popular digital currencies to buy nearly everything, from a cup of coffee to a new car. This represents a huge leap forward for the still-emerging technology. Meanwhile, Visa announced that it became the first payment processing company to settle a transaction with USD Coin (USDC), an open-source stablecoin backed by the U.S. dollar. According to the coin’s website, USDC “is issued by regulated financial institutions, backed by fully reserved assets” and “redeemable on a 1:1 basis for U.S. dollars.” As of March 28, there were 11.3 billion USDC in circulation.

Not only will Visa users be able to make purchases with USDC, but Visa said it would also one day support new central bank digital currencies (CBDC) as they become available. According to the company, some 80% of central banks are strongly considering or in the process of launching their own national digital currency.

Mastercard is reportedly doing the same, announcing in February that it’s engaging with “several major central banks around the world” as they develop CBDCs. At the moment there’s no word on when Mastercard customers can expect to start paying with cryptos, or even which cryptos will be supported, but it seems likely we’ll hear something soon now that Visa has taken the first step.

Currently the sixth largest U.S. company by market cap, having surpassed Visa and Berkshire Hathaway, Tesla has been ramping up its accumulation of Bitcoin.Those of you in the market for a Tesla may have noticed that you can already select Bitcoin at checkout, only a week after Elon Musk tweeted the news.

If you recall, the company disclosed that it bought $1.5 billion worth of the digital currency as part of a corporate policy that allows the electric vehicle (EV) maker to invest in alternative reserve assets, including not just cryptocurrencies but also gold bullion and gold ETFs.

Musk often tweets about cryptos to his nearly 50 million Twitter followers, which can trigger incredible price swings. Dogecoin surged more than 1,000%, from $0.007 to $0.080, in as little as 12 days in January and February after the Tesla “Technoking” tweeted about it.

Someone recently developed a bot, in fact, that automatically buys Bitcoin whenever Musk mentions it in a tweet. This reminds me of the Trump & Dump Bot, which used artificial intelligence (AI) to identify publicly traded companies whenever they appeared in one of the former president’s tweets. The bot then shorted the stock and donated the proceeds to charity. Trump’s Twitter account was permanently suspended on January 8.

Gold Off to Its Worst Start in Almost 40 Years. Buy the Dip?

The price of Bitcoin has more than doubled so far this year and on Friday cracked the $60,000 resistance level in intraday trading. Ether, meanwhile, is up more than 180% for the year after hitting a new record high last week.

Not every inflation hedge has been a winner, though. Gold is having its worst start to the year since 1982, losing close to 12% for the three-month period, even as concerns over inflation are intensifying. 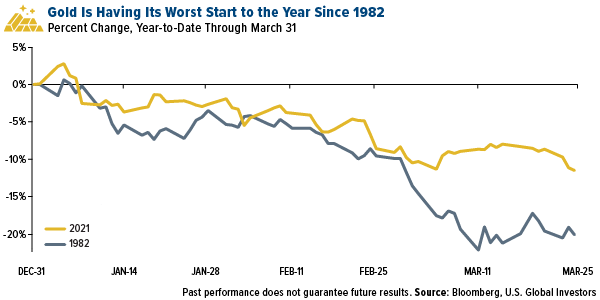 Since touching its all-time high of around $2,070 per ounce at the beginning of last August, gold has been under pressure from steadily rising bond yields. The yield on the 10-year Treasury is currently trading above 1.7% as investors dump bonds in favor of risk assets. Bond yields rise as prices fall. The U.S. Dollar Index, meanwhile, rose above 93 last week, which also dampened the yellow metal’s appeal. I think it’s important to point out that gold’s investment case right now remains as strong as ever, and investors would be wise to consider using this price dip as a buying opportunity. Money-printing remains at a record clip, and the debt continues to be piled on. Last Wednesday, President Joe Biden outlined his $2 trillion package to rebuild U.S. infrastructure, a plan that will reportedly be paid for over time with tax hikes on corporations and wealthy Americans. This legislation, if passed, would follow the $1.9 trillion coronavirus relief package, signed into law last month.

No Inflation? Home Prices Surge the Most in 15 Years

More economic data was released last week suggesting that inflation is running a lot hotter than what the Bureau of Labor Statistics (BLS) is reporting. Home prices in the U.S. rose 11.2% year-over-year in January, marking the fastest rate since February 2006. The median price for a new single-family home in the U.S. increased to $336,000 in 2020, up from $321,500 a year earlier, according to Census Bureau data. At issue is rising commodity prices, particularly lumber, which has stalled construction of new homes. According to the National Association of Home Builders (NAHB), soaring lumber costs have added more than $24,000 to the price of a new home.

As a result, only a little over 1 million new and existing homes were available for sale in the U.S. in February, the lowest level ever in data going back to 1982, the National Association of Realtors (NAR) says.

Homeownership has historically been one of the key ways Americans build wealth. But with prices on the rise, buying a home may be out of reach for many families.

The good news is that Americans appear to be getting back to work. In March, the U.S. economy added 916,000 jobs, the most since August. The industry with the biggest share of new jobs was leisure and hospitality, which might not seem positive at first glance since such positions tend to be low-paying. However, I see it as a further positive sign that the economy is opening back up and Americans are getting back to life before the pandemic.

Originally published by US Funds, 4/5/21

Some links above may be directed to third-party websites. U.S. Global Investors does not endorse all information supplied by these websites and is not responsible for their content. All opinions expressed and data provided are subject to change without notice. Some of these opinions may not be appropriate to every investor.

The U.S. dollar index (USDX) is a measure of the value of the U.S. dollar relative to the value of a basket of currencies of the majority of the U.S.’s most significant trading partners. The S&P CoreLogic Case–Shiller U.S. National Home Price Index is a composite of single-family home price indices for the nine U.S. Census divisions.

Holdings may change daily. Holdings are reported as of the most recent quarter-end. The following securities mentioned in the article were held by one or more accounts managed by U.S. Global Investors as of (12/31/2020): Visa Inc., Tesla Inc.

Literary Giant Dr. Maya Angelou To Be Featured On The U.S. Quarter

You’ve probably heard the saying, “Only when the tide goes out do you discover who's been swimming naked.”  This...

Coin Bureau: How to Avoid Getting Burned in Altcoin Market

Crypto influencer “Coin Bureau” (“@coinbureau” on Twitter) is offering some advice on how not to get burned in the...

FEG token Made me a millionaire! 500% gains! We called it!