Dogecoin price could be on the verge of a massive upswing that could retest its recently set up all-time highs.

Dogecoin price has been trudging around the $0.231 level since it crashed nearly 62% a few days ago. Now, DOGE seems to be trying to break past a crucial supply zone that extends from $0.262 to $0.302.

A successful breach of this area could form a foothold that allows the meme-themed cryptocurrency to retest its all-time high at $0.459.

Additionally, if such a move were to occur, the SuperTrend indicator’s sell signal flashed on April 21 will flip bullish and signal a shift in trend to the upside.

Following this, DOGE will need to slice through the 50% Fibonacci retracement level at $0.345 and the resistance barrier at $0.42 to reach its intended target. 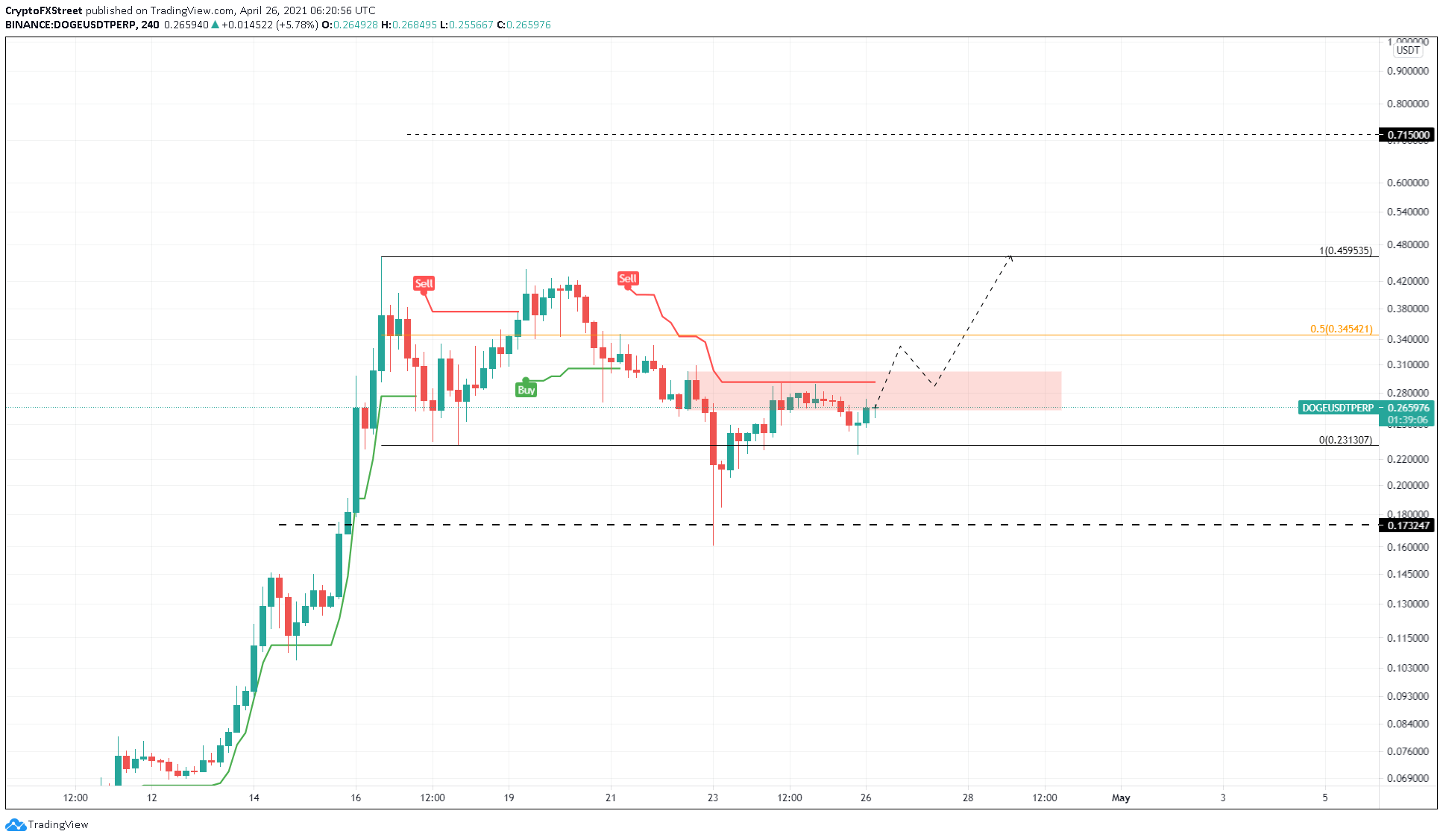 Based on IntoTheBlock’s In/Out of the Money Around Price (IOMAP) model, Dogecoin price will face relatively minor resistance levels.

Roughly 28,000 addresses that purchased nearly 2.82 billion DOGE are “Out of the Money.” Hence, the upswing could face selling pressure from investors who might want to break even.

Interestingly, the funding rate for Dogecoin is on a sharp recovery from being negative to almost zero, which shows that speculators are expecting DOGE to surge higher. Hence, a large portion of the crowd has turned optimistic about the meme coin.

All in all, Dogecoin price looks bullish, but the catch with its bullish thesis is that it has to clear the immediate supply zone. However, a failure to stay above it or breach it will result in a correction to $0.231.

A breakdown of this level will invalidate the bullish thesis and trigger a 10% correction to $0.206.

New Delhi: Major cryptocurrencies showed strong signs of recovery on Thursday after Tesla chief said the company would 'most...

A highly anticipated festival-like gathering of fans and community supporters of Dogecoin (CRYPTO: DOGE) has announced its initial details...

Dogecoin Continues To Rebound As Bitcoin Tests Resistance At $32,000

Elon Musk Says He Owns Bitcoin, Dogecoin And EthereumDogecoin is currently trying to settle above $0.19 while Bitcoin is...

My partner, the Dogecoin mogul

Jul 23rd 2021by Virginia HeffernanWe bought a beaut of a truck this summer: a second-hand, barn-red Nissan Frontier with...

Contents "Recipe for success" from MarkusWhat is not "good" for Markus? Dogecoin founder Billy Markus revealed his vision for...

What are the chances of XRP seeing an upside of 11%